Without Drugs Or Medications

Tinnitus is generally defined as noise or ringing in the ears, in the absence of an external sound source. The CDC estimates that approximately 12% of adults (over half a billion people worldwide) suffer from moderate to severe tinnitus, ranking it among the most common ailments on the planet. Reports from sufferers range from mild annoyance all the way up to severe emotional and psychological distress, with symptoms that include anxiety, stress and depression.

Despite numerous trials and studies, there is no known cure for tinnitus, but a pair of promising techniques can be used to address and relieve tinnitus symptoms with a high degree of success, without the need for drugs and medications. The first technique utilizes a variation of the concepts pioneered by Jon Kabat-Zinn in his wildly popular Mindfulness Based Stress Relief (MBSR) program. The second technique uses sound to mask the hallmark ringing experienced by most sufferers. The benefits of the second technique can be amplified with the addition of well-known and simple brainwave entrainment strategies.

Jon Kabat-Zinn is generally credited with bringing "Mindfulness to the masses" with the introduction of his well-known Mindfulness Based Stress Reduction (MBSR) program at the University of Massachusetts Medical Center in the 1970's. Since then, his original program has generated intense interest for its proven ability to help with stress and anxiety reduction.

An adaptation of his program that specifically addresses the needs of tinnitus sufferers is known as Mindfulness Based Tinnitus Stress Reduction, or MBTSR. True to its roots in traditional mindfulness meditation, MBTSR invites tinnitus sufferers to view their symptoms in a non-judgemental and accepting way. By shifting the perspective in this fashion, mindfulness is used as a habituation mechanism that is effective at lowering the stress and anxiety that often accompanies tinnitus. Given that stress and anxiety are often seen as the dominant precursors to chronic tinnitus, mindfulness acts as a positive feedback loop, lowering both direct and ancillary symptoms. In just a few weeks, participants in one study reported dramatic, beneficial results by incorporating a simple mindfulness practice into their daily routine.

Mindfulness has also been proven to have a higher efficacy rate than other commonly used regimens, such as Relaxation Therapy.

Accoustic suppression, also known as "tinnitus masking", is a well-known technique for mitigating or eliminating the symptoms associated with tinnitus. Numerous studies point to the benefits of using white-noise and other background sounds to mask the irritation caused by the constant drone of tinnitus. There is also a growing body of evidence suggesting that the addition of brainwave entrainment sounds such as binaural beats to a mix of white-noise and nature sounds, can amplify the relaxing effects of masking by providing the brain with cues that result in an all-natural slow down accompanied by a heightened sense of relaxation and calm. There are also well-documented studies demonstrating how masking can provide residual tinnitus relief that extends for hours after the masking sound/s have been removed, in a phenomenon now known as "Residual Inhibition."

Apps such as The Fuzing App have demonstrated the ability to help with tinnitus by delivering soothing and targeted audio sessions directly to your mobile phone or tablet. Mindfulness sessions will invite you to adjust your perspective by viewing your tinnitus symptoms in a non-judgemental and accepting way. You'll find numerous mindfulness meditations like those found in the top MBTSR programs to help tinnitus sufferers cope more successfully with their symptoms.

The Fuzing App also incorporates an innovative sound-mixer that will allow you to create your own personalized soundscapes featuring nature sounds, white noise and binaural-beats brainwave entrainment sounds, to effectively mask your tinnitus symptoms. Look for our "Tinnitus Relief" mix template that can be used as a starting point for creating your own effective and personalized tinnitus mask.

Additional relaxation, anxiety and sleep audios provide you with even more tools for combatting your tinnitus symptoms.

Totally FREE, with no ads and no in-app purchases or subscriptions 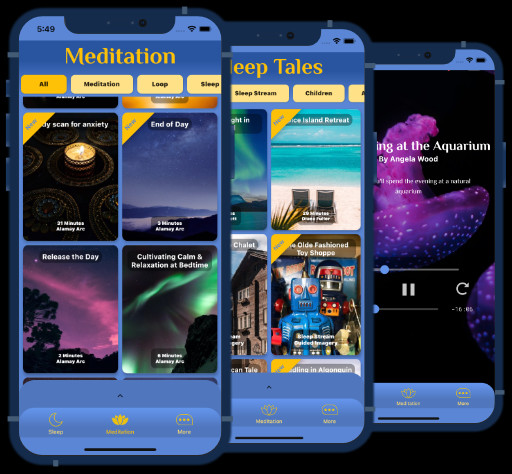